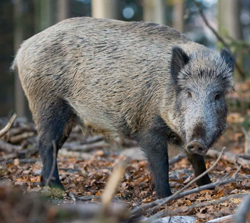 [Update: Additional information on this topic was added to the website and can be found at the following link:  https://invasivespeciesireland.com/news/wild-boar-statement/]

A wild boar is not something you would expect to see in the Irish countryside. The archaeological record indicates that wild boar died out in Ireland over 5000 years ago.  However, in recent years this large animal has been found in Counties Kilkenny, Roscommon, Tipperary, Wexford and Wicklow.

The release of wild boar into the wild in both Ireland and Northern Ireland is illegal. This species is not a welcome addition to the wild animals of Ireland. The wild boar has been identified as one of Ireland’s Most Unwanted Invasive Species by the North/South Government led Invasive Species Ireland project. The Invasive Species Ireland Steering Group warns that if wild boar were to become established it could threaten agricultural productivity. There would be a high risk of wild boar transmitting disease to livestock; damaging crops, fencing and farmlands; damaging protected sites and habitats; and injuring people either by charging at an unsuspecting member of the public or colliding with vehicles.

These threats have prompted state bodies in Ireland and Northern Ireland to work together and develop an Invasive Species Action Plan. This plan, launched today (18 November 2011) is supported by a Policy Position Statement on the subject. The documents will help coordinate both Governments’ response to the threat posed by the release of wild boar.

John Kelly from Invasive Species Ireland said ‘the focus of the Action Plan is primarily on prevention and responding to any threats that arise’. He also added ‘if we can prevent wild boar from becoming established in Ireland we can prevent the economic and environmental harm that a wild population could cause’.

Both Ireland and Northern Ireland have animal health strategies in place that help protect farm animals from diseases. In the event of an outbreak of one or more notifiable diseases with the presence of wild boar in the wild, the task of eradicating the disease would be significantly more challenging, cost more and be more difficult to achieve. John Melville, animal health expert from the Department of Agriculture, Food and the Marine said ‘we want to work with anyone keeping wild boar to ensure that they are compliant with the regulations in place. These regulations protect agricultural productivity and the environment, today and in the future’.

If any wild boar escape, the keeper should report it as soon as possible and work to recover all animals. Similarly, if you know of anybody keeping wild boar with the intention of releasing them, or if you spot a boar in the wild, we would ask that you report this to Invasive Species Ireland: www.invasivespeciesireland.com

The Invasive Species Ireland project is a joint venture between the Northern Ireland Environment Agency and the National Parks and Wildlife Service.