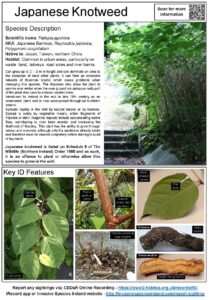 Origin and Distribution: Impacts: How did it get here? Is it found in Northern Ireland? Advice for commercial property and homeowners

It includes such advice as Some Do's and Don'ts;

Further Resources: For further queries, you can contact the Invasive Non Native Species (INNS) Team in the Northern Ireland Environment Agency on 028 9056 9558 or Email: invasivespecies@daera-ni.gov.uk