Under The Invasive Alien Species (Enforcement and Permitting) Order (Northern Ireland) 2019, it is an offence to;

an invasive alien species which is included on the ‘EU list of Union Concern‘.

In addition, it is also an offence to; 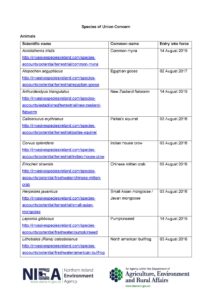 In Northern Ireland The Wildlife (Northern Ireland) Order 1985 (as amended) also provides regulation of other invasive non-native species. Under Article 15 of the Order it is an offence to;

N.B. There are no species that are included on both Schedule 9 and the ‘EU list of Union Concern‘.

It is not an offence to have Japanese knotweed present on your land – landowners also have rights with respect to their private property and what they can ‘grow’ in their gardens. However if there is a Widely Spread Species growing on your land, landowners must have management measures in place.

There is perhaps a community expectation within society that owners of property and land look after such assets responsibly but it is important to highlight that, in both National and EU legislation, the Northern Ireland Environment Agency’s policy context towards all Invasive Alien Species is one to assist protect the ecology of an area as opposed to safeguarding property or other commercial assets.

Where Japanese knotweed is spreading from one private property to another, it constitutes a civil matter between the two landowners.

When is it a crime?

If a landowner were to remove either Japanese knotweed or giant hogweed (both of these species are classified as ‘controlled waste’ ) from a site in an inappropriate way, in other words not using properly licensed hauliers, Waste Transfer Notes and delivering the material to licensed landfill facilities.

But that would not be an offence under wildlife legislation, it would be a breach of NI Waste Legislation.

If a landowner is disposing of Japanese knotweed, or any other controlled waste, by cuttings or by excavation The Waste and Contaminated Land (Northern Ireland) Order 1997 (as amended) articles 4 (1a) and 4 (1b)  is relevant. This legislation places a duty of care on “anyone who produces, collects, carries, keeps, treats or disposes of controlled waste to take all the necessary steps to keep it safe and to prevent it from causing harm, especially to the environment or to human health”

The Northern Ireland Environment Agency provide an online service to allow you to search for appropriately licensed waste sites. This is available on the DAERA website at: http://www.daera-ni.gov.uk/articles/waste/registered-waste-carriers-transporters.